Here is a video from the guys of FightTips.com which show mistakes people make when fighting in the street.

My favorite is no.#10 - Keeping your shoes tied tight. I loved this one, it's very funny but so true.

The only tip I would disagree with is no.#12 - Don't hockey fight: Don't grab with one arm.

When adrenalized you will tend to grab or punch to one side more than the other, this is due to gross motor movement patterns.

Plus you will get more power from striking this way since you will be crossing center line and getting more of your bodyweight into the strike.

But that's just my opinion, Shane and Terrell have made a very good video on what can happen when simple mistakes are made.

So watch and learn and above all don't make these silly mistakes when fighting.

Bareknuckled vs Gloved: Six thru Ten 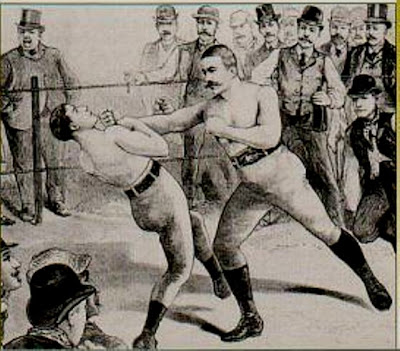 Here is the next group of reasons why you should consider training barefisted and not just with wraps and gloves exclusively, especially when it comes to streetfighting.

6. Barefists tend to fracture the bones around the eyes, the cheeks and the jaw.

You see when striking with gloves you have a large amount of padding on them as you strike your partner when training, not so when hitting someone on the street.

Your barefists are harder and can really do some damage on a face when hit hard.

You can slice open the skin on your opponents face with your knuckles and break the orbital socket around the eyes much easier than you can with gloves on.

7. Gloved fists allow you to get away with hitting areas you wouldn’t hit barefisted.

When you’re sparring with your partner in the gym, you tend to not pay much attention on where you are hitting.

You may hit an elbow, top or side of the head or maybe even his glove and not think anything about it; after all you’re wearing gloves and wraps to protect your hands from such inconveniences.

But do that bareknuckled in a streetfight and you will end up injuring your hand.

Training bareknuckled teaches you where to damage your adversary without damaging your fists in the process.

When you train exclusively with gloves and wraps, you end up relying on them more than you know.

You forget to tighten your fist on contact, due to the fact that your wrap and glove don’t allow for your fist to clench properly.

You also end up relaxing your wrist since the wrap is supporting it; this is a recipe for disaster or an accident waiting to happen.

I can guarantee, you will hold back on your punches when striking bareknuckled if you have lazy hand and wrist syndrome.

9. Target areas are bigger with a gloved fist.

When using gloves they can be almost two to three times the size of your hand and depending on how much padding they have, that makes for a very large striking surface to hit with.

Your bread and butter strikes won’t hit or impact the same when you land them bareknuckled, since the target area will be smaller.

Your distancing will also suffer since your fists won’t be as thick as a glove would be. So you better start to get in closer or extend that arm a little wider if you plan on hitting anything.

10. Gloved fists make your strikes heavier, due to the weight of the glove.

When striking with gloves they can weigh up to one to two pounds per glove.

You will get used to hitting with that weight on the end of your wrist as you start to throw that leather around, but let me warn you it won’t be there when you have to throw those same punches bareknuckled.

Your fists will be lighter and will be carrying less mass to strike with; your hooks won’t tend to pull away from you as you throw them since the centrifugal force won’t be so strong. You do realize that’s why hooks are easier to throw with gloves on don’t you?

Well I hope that this information will help you realize the importance of training as close to the real thing as possible.

Remember you will fight the way you train, so train the way a fight will really go down.