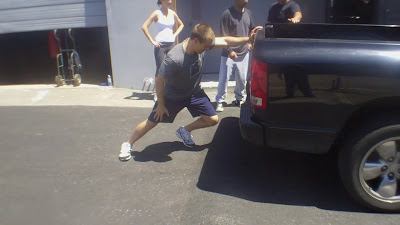 Back in the late 90’s there was a T.V. show called “Breaking the Magician’s Code: Magic’s Biggest Secrets Finally Revealed”.

A masked magician would expose the methods behind large scale magic tricks and illusions by explaining how they were done and showing you how they were performed.

His reason for doing this was because he was tired of seeing magician after magician perform the same tricks and illusions over and over again.

By exposing these secrets it would force magicians to come up with new tricks and illusions to entertain us.

Today I’m going to uncover a conditioning exercise that needs to be exposed and updated.

And that lowly exercise is truck and car pushing.

For years I have read articles and have watched videos from coaches, trainers, athletes, MMA fighters on pushing vehicles for conditioning.

If you go to YouTube you’ll find a large amount of videos on car or truck pushing.

For years I have watched and waited for someone else besides myself to come up with a new way to push a vehicle for conditioning.

But sadly it’s been the same way year in and year out, video to video.

Then get in front of the hood and push it back, while this works well for conditioning, man is this ever boring!

If you had a barbell and all you ever did was bench press or squat with it, you’d get pretty bored very quickly.

Recently to my excitement I found one, one person who has come up with a new way to push a vehicle.

Getting into a push up position this person put his feet on the back bumper of his truck and pushed the truck with his hands on the ground.

That was awesome, but unfortunately after 35 plus years all I have found are two ways to push a vehicle.

Come on people where is the creativity or out side the box thinking when it comes to pushing a car or truck.

Did you know that one of the favorite exercises of the ancient Greeks was pushing large columns and round boulders on soft sand.

They learned this by watching how their slaves developed strong bodies by moving these types of objects on their properties.

And since slaves were forbidden to train at the local gymnasiums in the city, they reasoned that this was a great way to develop the body.

So to all you experts, trainers and coaches out there, I challenge you to come up with new exercises for pushing a vehicle.

Then way can’t you come up with a single variation when it comes to pushing a vehicle for conditioning?

In my next article I will get your mental juices flowing by teaching you five new exercises with variations to get you started.

So now that I have exposed this conditioning exercise, it’s your turn to create the magic!

Until next time, train safely and creatively.