Happy Earth Day folks! Just a reminder to get out there and do your part for Mother Nature. Here are a few suggestions:


Last but not least, love your fellow man. Give the gift of blood.

Being mugged not what its cracked up to be

Over this last weekend I received an email from one of my YouTube subscribers who had a hell of a story to tell.

Friday night, this young man, only 15 years old, was robbed at knife point in the street. The mugger demanded money and his cell phone. He did the right thing in this situation: he complied.

It's really easy, after training martial arts or having fought in the ring / octagon, to get stuck in that macho fantasy of kicking the living crap out of any bad guy foolish enough to try to rob you. But in reality, if/when you're ever thrust into that singular moment, and a wave of fear and adrenaline are coursing through your veins, all those well planned out, kick ass moves - the wrist lock-groin kick-arm bar-rear naked choke for the win - suddenly run screaming from your memory; all you're left with is your reptilian, caveman brain to handle this delicate situation. Our viewer did the correct thing. If someone mugs you with a weapon and they're demanding money, wallets, jewelry, etc. the safest option is to comply because more often than not, he's only brandishing the weapon to incite fear, and compliance. If someone really, really wants you dead, there would be no confrontation, he'd walk up to you and stab you/slit a major artery, etc.  BTW, I'm going to contradict myself here... just sayin'.

Back to my story. So, he gives the mugger his phone and money, but the mugger decides that that's not enough and attacks the kid with his knife. The young man was able to evade the knife, grab and control the attacker's arm , and then the kid threw a relentless barrage of elbows to the mugger's head, effectively dropping him. From there our hero made his escape.  (Lesson here: just because you give up your valuables means you're out of the woods. That's the unpredictability of human nature, and street crime). I told you I'd contradict myself.

The crazy thing for me is that this young man sent me a message thanking me. He said that he had been watching my muay thai videos and practicing what he'd seen, and was able to apply some of these concepts in  that high stress situation. It's amazing that he would think of thanking me, and personally, he gets all the credit for handling the situation the way he did. But on the other hand, what an awesome feeling it was for me to think that perhaps, in some way, those silly YouTube videos I shoot actually helped somebody survive a potentially lethal situation.

What are the take ways from this?
1. The safest bet is to comply with the demands of an armed robber.
2. When real violence hits you, its an adrenaline rush like you've never had before. Gross motor function is pretty much all you've got.
3. If all other options fail and you can't avoid confrontation, it's best to apply overwhelming force. Think cornered cat holding a baseball bat.
4. No matter how insignificant you think your actions are, you can still hold influence over others, good and bad. Set a good example.

Alright, moral lesson is done for the day. Get back to hitting the bags, or each other :) 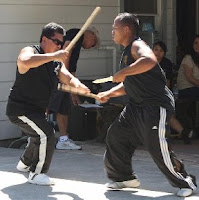 If you live in the San Francisco Bay Area, or Northern California for that matter, this is a very rare opportunity to get exposed to a fairly closed system of escrima, the dominant Filipino style of fighting. Giron Escrima maintains a pretty small community of practitioners, most of them based in the Bay Area and central valley regions of California. Bahala Na Original Grion Escrima Federation is the governing body that works to strictly maintain this system in its purest form.

The system's founder, Master Michael Giron learned from his father, Leo Giron, who had proven this style of escrima through his experiences fighting the Japanese during World War II. Leo passed on his real world lessons of jungle warfare to his son, Michael, who carries on the tradition.

The seminar will be held on April 30th at the Muay Thai Academy International in Santa Clara, CA. This also happens to be where Daniel Sambrano and I both teach. And, no, we do not make ANY money off of these seminars. We rarely, rarely bring in outsiders to instruct clinics at the Muay Thai Academy for a number of reasons: quality control is probably at the top of that list. If you're into escrima or arnis, or if you're just interested in exploring other martial arts, this is a great opportunity. Here are the grizzly details:

There are only 35 spots available for this seminar. RSVP with Jacob Ragsdale
jacobsiunim@yahoo.com

You can also RSVP on Facebook if you're too lazy to open up your email client. But you'd have to be rediculously lazy...