Change up your muay thai with the lost art of 'shifting'

Here's a post that Daniel drafted but hasn't posted yet. I've been busy with a move this week, and didn't have time to write a post from scratch. I went through this, added my own ideas & tips, so you're stuck with some really great advice, and a few of my snarky comments thrown in for good measure.

Shifting allows a fighter to remain in constant motion. You can attack, evade, and change leads while remaining rooted, centered, balanced and stable. You'll will be able to change sides and increase speed without sacrificing power. You be able to move faster without bobbing up and down. That bobbing is actually a drain of vital energy. You can change sides so that by the time your opponent realizes what has happened he has been hit many times.

Whether you're boxing, training MMA, or fighting muay thai, you can still switch sides easily and continue fighting without upsetting your  flow. It actually serves to confuse your opponent, throwing both his timing and balance off.

So, you want to throw strikes with significantly more power, eh? Shift your weight as you throw punches and elbows. Energy travels from the ground through every joint of the body and finally into the fists. If you're pivoting your hip while you strike, you're generating toque. If you're shifting your weight, which includes that whole 'mass x acceleration' bit, you're generating more force. If you add that torque to the drive and the shift you're got a little something called compound momentum. But I digress. I mean, what do a couple of muay thai instructors know about physics anyway? We'll save the compound momentum theory for another post.

By never having to re chamber or telegraph an attack, your punches come at you like a rattlesnake strike. Shifting is especially effective in a street fight, or multiple opponent situations, where continuous movement is an imperative. Also, think of this: in the ring, muay thai matches are a sort of gentleman's agreement. Both fighters square off and exchange blows back and forth. I don't care how conditioned I am, I hate getting hit. The less you get hit the odds f you winning and/or surviving go way up. If you shift or drive while you strike you move as you throw - meaning that after you've thrown that punch, you are not in the same place as you were when you started the technique.

Here's a litany of benefits that will improve your fighting abilities when you integrate shifting into your training regimen:

Shifting will make you a very dangerous fighter with no equal (at least at your gym).  It really will add a completely new dimension to your combinations and fight game. Combinations will flow more easily, and transitions from punches to knees to elbow to kicks will feel much more natural. Shifting trains you to become an ambidextrous fighter, which I cannot evangelize enough. You do not want to be a one-sided fighter.

I'll let Daniel's words send us off here. But as you read this, imagine a large, somewhat scary Hispanic man yelling at no one in particular, with an extra bit of emphasis in the 'And' that start each sentence. If you know Daniel, you understand.

"And finally if you’re not shifting, you’re not fighting as well as you could be, in other words your fighting sucks! And that will make you twice the fighter you are right now! So start shifting when you train; cause you don’t ever wanna meet a fighter who does."

Elbows have a reputation for being a dirty, but highly effective technique used to end a fight. Inherently, they're powerful strikes, but a common misconception in the MMA and mauy thai communities equate the size of the muscle to the power of the elbow. On the contrary, muscle mass has little to do with contributing to the overall power behind the elbow strike.

Instead of throwing your elbows as if you would a ball, concentrating you power in the upper arms and shoulders, think of the throwing the elbow strike with your entire body. Think rotational force, so instead of relying on arm strength alone, you're levering the rotation of your entire body, from the pivot on your feet, to the drive of your hips, and your entire upper body. The key is to learn to throw your muay thai elbow strikes with your entire body moving as one. Take a look at the little instructional video I did on the basic mechanics of the muay thai round elbow for your own training purposes.

I receive many emails from a lot of people from around the world who have the same problem - either they don't live anywhere near a gym, or local martial arts schools don't offer muay thai. In the face of this challenge, many turn to the Internet to learn from home.

I certainly sympathize with those of you who've reached out to me asking for advice on how you can train from home, however, I have a hard time subscribing to the theory that one can learn a martial art from a book or a video. It's pretty hard to find a video online that really breaks down the muay thai techniques for the purpose of actual instruction. I myself am guilty of throwing up videos in which I speak fast, I throw fast, and I don't lay out the mechanics of a given technique.

But recently, a YouTube subscriber of mine sent me a video of himself throwing shadow kicks that he had learned by watching my videos. And I was impressed. Maybe there is something to this whole idea of learning through video. Sure you don't get the feedback, and there is no way to tell what you're doing right and what you're doing wrong, but by allowing me to watch his technique, I was able to provide him with detailed critiques and tips to help him improve.

So with that in mind, let's try an experiment, shall we? I posted a video that covers the basic mechanics in the old style muay thai round kick. It lacks the cool sound effects, and bag bashing, and the graphics, but it has the meat and potatoes that go into successfully knowing this technique.

If you choose to try it out, here's a few other tips to consider:

1. Open up your hips by turning your heel inward.
2. The pivot is the most important part of the kick.
3. Go slowly, it's harder that way, but you'll build the muscle and you'll develop better habits than rushing.
4. Spin all the way through. Go with the momentum.
5. It's alright if you feel off balance, you're actually supposed to be off your center. 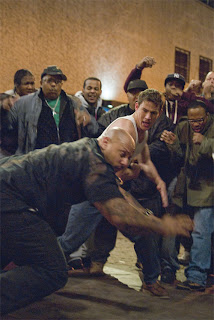