The Law of Impact, Street Fight vs Sport Fight 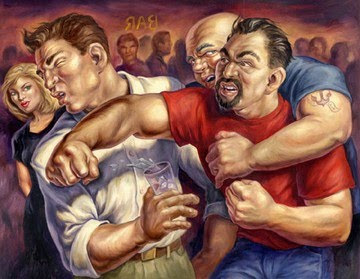 When it comes to accidents on the highway streets, the law of physics always favor the larger, heavier vehicles. Even though smaller compact vehicles are better on gas and can get you around town much easier.

But what these “Politically Correct” “Kumba Yah” type of vehicles seem to forget is that they can’t take too much impact especially when hit by a larger vehicle. It’s just the way it is, sorry. That’s why I drive a big powerful Dodge Truck with a Hemi Engine, it keeps me safe on the streets. And it’s the same way when it comes to striking someone in a vicious street- fight.

You better not have small weak, soft punches that are just meant to score points and look pretty moving fast. Or you’ll most likely find yourself laid out on the filthy ground wallowing in your own bloody self delusions, spitt’n teeth out. You need to have impact crushing, power generating fists that can hit with such brutal viciousness that it’s scarey to think what kind of damage you’ll cause to any fool who chooses to tangle with you.

You need to know what the majority of strikers don’t about how to generate maximum power in your punches. You need to be hitting like the fighters of old, legends like Dempsey, Marciano, Fitzsimmons, Choynski, Jeffries just to name a few. After all boxing was once upon a time taught for self protection, it was the martial art of the west.

Now it’s become a watered down version of it’s once powerful self, due to the way it’s being taught in the gyms across the country today. In WWI and WWII boxing was taught to the soldiers to teach them to have aggressive footwork and power in their fists but not to strike the enemy with but to use in bayonet trench fighting. That’s how important boxing was. It taught you how to prevail in a life and death situation.

Todays boxing only works well in the ring with a referee and with rules and let’s not forget boxing gloves. They tell you don’t hit with your barefists you’ll break your hands so you
don’t but you get into a streetfight and you end up with a broken nose, jaw or ribs, what a trade off! You're taught combinations that will win you the day in the ring but mess you up in a streetfight. You're taught rules that will make you a fair fighter and a sportsman but get your ass handed to you by some scum in the street who follows no rules, save one “the law of the jungle”.

Wake up! And pull your head out off your coaches ass and think for yourself for once. Fighting with rules and restraints, and using safety equipment is only going to get you hurt when reality hits you upside the jaw. So get some street smarts and learn to fight dirty using proven fighting methods that will teach you to be merciless to your enemy.

And be ready to answer the call of violence when it gives you a ring.