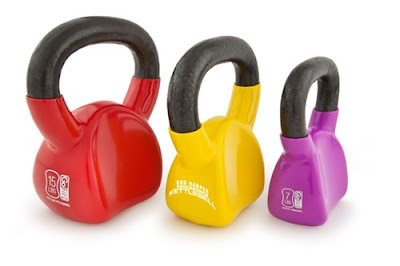 Hey everyone just wanted to inform you about a new piece of training equipment that works great for strengthening your striking muscles. It’s called the “Contour Kettlebell” and it works great at mimicking your strikes without getting in the way of your movement. They are made by GoFit and Bob Harper from the Hit TV Show "The Biggest Loser" for people that didn’t like hitting their forearms when performing kettlebell exercises.
So they flattened the sides of a kettlebell and contoured it slightly so as not to hurt the forearm. But if you know me; I’m always thinking out side the box and I realized that they didn’t know what they really created. You see this is shaped just like a Padlock or Keylock as they’re called in China to develop the body for fighting and exercising. The Contoured Kettlebell is like a modernized version of the Chinese Keylock.
I bought two pair of these Contour Kettlebells and tried them out. I went to youtube and found a few videos on how to workout with keylocks and I just copied some of their movements.  Let me tell you they worked great, I used them with my punching movements and elbows, they have a different feel then regular kettlebells. You can bring them closer to the sides of your head and move freely with them. By being able to bring them closer to your body you can really mimic the way you fight and keep them tight to the body.

The price ranges from $29.00 - $85.00 dollars and they come in 7, 10, 15, 20, 25, and 35lbs. They come with a plastic cover around the bell and the handle is bare metal. I’ve priced keylocks and they can cost over a hundred dollars for a twenty pound one and a 35 pounder will set you back $299.95. So as you can see they are a bargain when compared to a real keylock.  You can purchase them at Target or on Amazon. So all you Martial Artists, Boxers, and Muay Thai Fighters should try them out and see what you think.
About the only thing I don’t like is that the handle on the lighter contour kettlebells are a bit thinner but if you add some tape or put a pair of fat gripz on the handles they’ll be fine. My fists, wrists, forearms and elbows have benefitted greatly from using them and I know they will benefit you also.

By the way, the two pair I bought were 10 and 15 pounders, they really work great for punching. And as a bonus you can also do any kettlebell exercise you can think of with them.

So get yourself a pair and start striking.
Take Care

P.S. Don’t be like me and freak out the shoppers and the workers at Target by doing a quick workout with them in the aisle, trust me when I say they work great!
Posted by Daniel Sambrano at 6:52 PM