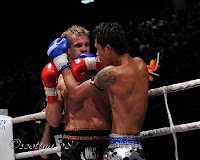 Last week California Muay Thai blog let it out that elbows will soon be allowed in amateur muay thai fights. The California Athletic Commission currently allows elbows only in sanctioned professional muay thai fights. Unfortunately, most pro muay thai fighters in the US rarely use their elbows in fights, and it shows. The elbows I've seen in fights stateside, they're usually thrown from way outside their effective range.

If this alleged easing of the regulations does come to pass then I'm optimistic about American muay thai fighters' and the overall improved quality of elbow use in future fights. This should also create a ripple effect in how muay thai camps and MMA schools throughout the Golden State treat the elbow as part of a fighter's arsenal. My hope is that there will be a widespread improvement in regards to attention paid to technique and an increase in time spent training & instructing the elbow strike and all of its variant angles and applications.

Please comment if you have any news on this subject.
Posted by Unknown at 1:13 PM