The Major Purpose of Fistic Instruction

The Arm of Jack Dempsey 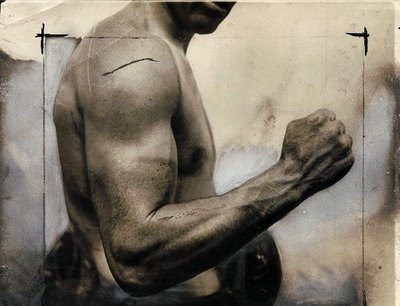 The purpose of learning to box is to teach a person to defend himself with his fists.

This is what Jack Dempsey said back in 1950 and wrote about in his classic book “Championship Fighting”. This is one book I read again and again and always come away with something new with each reading.

Today boxing coaches, trainers, and martial arts instructors have all but forgotten the purpose of using the fists to protect and defend one’s self. You see you don’t start with the premise of learning to box for sport or competition, but for self preservation. You learn how to strike powerfully for one purpose and one purpose only, to knock out any assailant that would try to hurt you, by causing enough trauma by way of your fists to their body and head.

Forget about the jab being used as a set up for your more powerful cross, you don’t have the luxury of time for this in a street fight.

And having a strong side and weak side stance just won’t cut it either.

And don’t even dance around your assailant throwing light punches to score points because that ain’t happening.

And whatever you do, don’t throw your punches the way a boxer does you’ll most likely break your hand, because you won't be wearing any gloves or wraps.

What you need to know is how to make a proper fist with your bareknuckles, and how to throw it for maximum power. You also need to know what angles are best to punch from, and what footwork is the most useful in a streetfight. You must develop non-telegraphing strikes that are so dangerous you could permanently damage your attacker instantly.

Learn to fist fight like the champions of old and develop explosive punching power with both fists and learn to be a true pugilist.