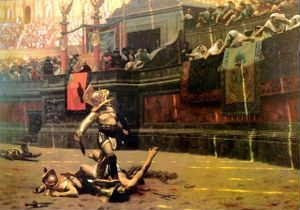 Here is an interesting article on the exercises the ancient gladiators used to get conditioned, add them to your training, who knows they just might bring out your inner warrior...
A List of Ancient Exercises from Galen's De Sanitate Tuenda Galen (130 - 200 A.D.)
Hailed from Pergamon, an ancient center of civilization, containing, among other cultural institutions, a library second in importance only to Alexandria itself. Galen's training was eclectic and although his chief work was in biology and medicine, he was also known as a philosopher and philologist.
Training in philosophy is, in Galen's view, not merely a pleasant addition to, but an essential part of the training of a doctor. His treatise entitled That the best Doctor is also a Philosopher gives to us a rather surprising ethical reason for the doctor to study philosophy.

The profit motive, says Galen, is incompatible with a serious devotion to the art. The doctor must learn to despise money. Galen frequently accuses his colleagues of avarice and it is to defend the profession against this charge that he plays down the motive of financial gain in becoming a doctor.

Galen's first professional appointment was as surgeon to the gladiators in Pergamon. In his tenure as surgeon he undoubtedly gained much experience and practical knowledge in anatomy from the combat wounds he was compelled to treat. After four years he immigrated to Rome where he attained a brilliant reputation as a practitioner and a public demonstrator of anatomy. Among his patients were the Emperors Marcus Aurelius, Lucius Verus, Commodus and Septimius Severus.

Galen divides his exercises into three categories, which we may term "strong", "rapid and "violent", which is a combination of the preceding two. Galen's listing of the exercises gives us a fascinating glimpse into the everyday activities of the Paleastrae, Gymnasia and other more leisurely-areas of the ancient world.
The affinities they have with the various sporting events can be made out: kicking of the legs for Pankration, rope-climbing for wrestling, holding the arms up for boxing.
STRONG:
1) Digging
2) Picking up something heavy
3) Picking up something heavy and walking with it
4) Walking uphill
5) Climbing a rope using the hands and feet: commonly done to train boys in the wrestling schools
6) Hanging onto a rope or beam for as long as possible
7) Holding the arms straight out in front with fists closed
8) Holding the arms straight out to sides with fists closed
9) Holding out the arms while a partner pulls them down
10) The preceding three exercises but while holding something heavy such as jumping-weights
11) Breaking loose from a wrestling waist-lock
12) Holding onto a person trying to escape from a waist-lock
13) Picking up a man who is bending over at the hips and lifting him up and swinging him around
14) Doing the same but bending oneself at the hips also when picking him up
15) Pushing chest to chest trying to force the opponent backwards
16) Hanging from another's neck, attempting to drag him down

Rapid:
1) Running
2) Shadow-boxing
3) Boxing
4) Hitting punching bags
5) Throwing and catching a small ball while running
6) Running back and forth, reducing the length each time until finished
7) Stand on the balls of the feet, put the arms up in the air and rapidly and alternatly bringing them forward and back; stand near a wall if afraid of losing ones's balance
8) Rolling on the wrestling-ground rapidly by oneself or with others9) Rapidly changing places with people next to one in a tightly packed group
10) Jumping up and kicking both legs together backwards
11) Kicking the legs forward alternatly
12) Move the arms up and down rapidly with open or closed fist, increasing in speed

VIOLENT:
1) Digging rapidly
2) Casting the discus
3) Jumping repeatedly with no rest
4) Throwing heavy spears and moving fast while wearing heavy armour
5) Any of the 'strong' exercises executed rapidly: presumably running uphill, swinging jumping weights forward and back, and lifting them up and down, chin-ups and so on.

Other Exercises:
1) Walking
2) bending up and down repeatedly at the hips
3) Lifting a weight up from the ground
4) Holding up an object for a long time
5) Full and loud breathing
6) Placing two weights on the ground approximately six feet from each other, picking up the one on the left with the right hand and then the one on the right with the left hand, then in turn placing them back where they came from on the ground and doing this many times with the feet stationary

The translation of this Galen text come's from an article at Judoinfo.com Submission Fighting and the Rules of Ancient Greek Wrestling By Christopher Miller
I hope you enjoyed the article as much as I did, now get out there and start training like a gladiator.

Posted by Daniel Sambrano at 3:45 AM